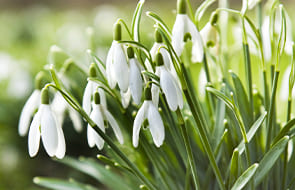 Snowdrops are a bulbous plant belonging to the daffodil family. Each flower has its own stem and the flower hangs down from the top of this stem. Each flower has 6 flower petals. The outer 3 leaves are oblong and the inner 3 are inverted heart-shaped. The long and narrow leaves of the plant are bluish green. The flower itself appears white but is actually just colourless. If you pinch a petal, you will see that it is crystal clear. This is because the air bubbles between the leaf cells have been squeezed out. 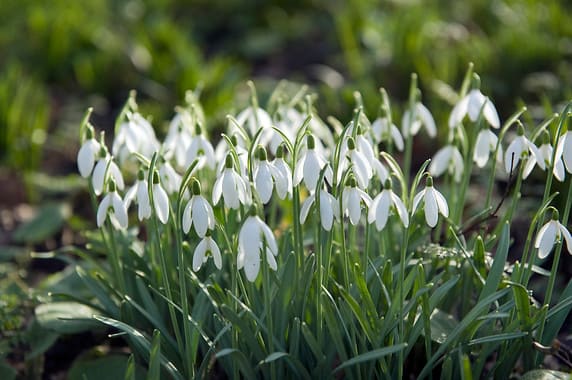 There are two main types of snowdrop, namely Galanthus elwesi and Galanthus nivalis (better known as the common snowdrop). There are also more than 70 other species of snowdrop. Snowdrops often grow in groups and are around 25 centimetres tall. One of the many popular names for snowdrops is 'early bird'. Did you know, by the way, that snowdrops are poisonous on their leaves, flowers and bulbs?

The best soil for snowdrops

When planting snowdrops, choose a soil that is well-drained. You can improve the soil structure by adding organic material to raise the soil a few centimetres. If you already have snowdrops, February and March are a good time to see where your garden could use more of them. The common snowdrop thrives in places which receive a lot of sunlight in spring and where the soil is shaded by the leaves of trees, shrubs and perennials in summer. Choose a warmer location for Galanthus elwesi. It does particularly well in a spot which gets full sun in summer. Snowdrops can also do well in grass, especially if the grass is not too thick (which is usually the case in shaded areas). Do not mow the foliage of snowdrops but let it die in May or June.

How to plant snowdrops

If you are going to plant the snowdrops, make a hole in the ground about 5 centimetres deep. Place the snowdrop with its roots against the bottom of the hole and do not loosen the soil under the roots. This prevents the soil from drying out. You can choose whether to plant the snowdrops in small groups: it is a matter of taste. But bear in mind that if you plant one bulb now, in a few years' time there will be three or five, and they will spread faster and faster.

The care of snowdrops

At the beginning (the first years even), you do not have to do much more than just enjoy the beautiful snowdrops. After that, you can look at digging up some clumps after they have flowered and planting them out. Make sure that the neighbouring plants do not smother the snowdrops. Not only with their roots but also with their leaves. If necessary, you can always move the snowdrops to a new location. In autumn, you can plant snowdrops as dormant bulbs. When the flowering period is over, the snowdrop needs to store energy for the next flowering season. Therefore, allow photosynthesis in the plants until they turn yellow and wither. Then remove the leaves. If you do prune green leaves, the plant will not be able to feed itself as well the following year and will therefore produce fewer and smaller flowers. Also, take care of the snowdrops in autumn and winter. Water them with a water-soluble fertilizer so that they develop new roots and top growth. Without fertilizer, your snowdrops will survive, but extra nutrients will stimulate more and ensure larger flowers and longer life.

If your snowdrops have finished flowering by the beginning of March, you can move them. Especially if they form dense clumps, it is better to divide them and place the divided clumps in a new spot. How do you do that? First, use a sharp spade to dig as deep as you can under the tussock in order not to damage the bulbs. Then dig out the whole tussock and use the sharp spade to cut it into 2 or more parts. Then pull the bulbs apart. Replant the shredded bulb in another spot in the garden.

Most snowdrop species flower in spring. However, some species start flowering in autumn. The special thing about snowdrops is that often the flowers start to grow first and only then the leaves. With most plants, it is the other way around. Some parts of the snowdrop are poisonous and eating them can cause nausea and diarrhoea. One of the toxic substances in the snowdrop is used in medicine against Alzheimer's disease.

The glossy snowdrop or Galanthus woronowii

A special kind of snowdrop is the green snowdrop or Galanthus woronowii. This plant grows with pure white flowers between light green, glossy foliage. The fresh green leaves make this flower a beautiful contrast to other snowdrops. The green snowdrop is native to the Black Sea region and likes to grow in the forests there. The leaves are more sensitive to frost than those of Galanthus elwesi and Galanthus nivalis.

Snowdrops grow in the wild in many countries and areas. To the south, the area extends to the Pyrenees. Eastwards, the snowdrop grows as far as Siberia. In the Middle East, snowdrops can only be found in the north of Syria. Snowdrops originally like to grow in a wood. Would you like to order snowdrop bulbs from us after receiving all this detailed information? Then take a look at our online webshop and purchase them very easily.

© 2022 When using materials from the site, an active link to dutch-bulbs.com is mandatory
OUR TRUSTED PAYMENT METHODS AND DELIVERY OPTIONS