SKU
1003277
Our customers trust us
Low price, high-quality bulbs
We cooperate with "Proven Suppliers from Holland". You will get excellent plants at the best price.
Free delivery on all orders over 100 EUR
We deliver your orders across Europe as quickly as possible to ensure that your bulbs and plants arrive in top condition.
Please note!
The best plants sell very quickly, so hurry up to order and get exclusive varieties first.
Skip to the end of the images gallery
-5% 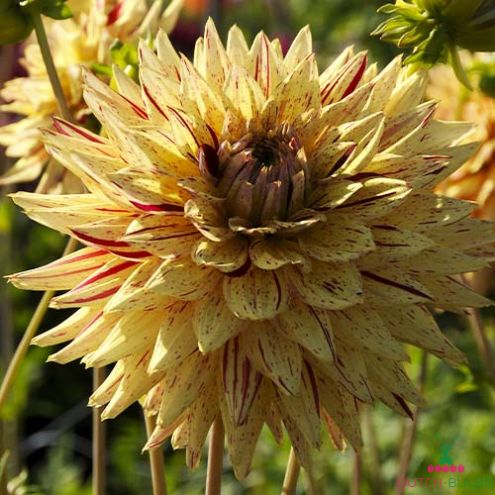 This variety belongs to the Semicactus dahlia group (group 9) - medium-sized border dahlias. Bred in 2000. Originator: Holland, Wayne (Canada). This plant grows to a height of up to 125 cm and blooms in summer and autumn. It has pale yellow tones with sparse, distinctive dark maroon streaks. They are beautifully shaped and as if 'prickly'. Interestingly, dahlia is the national flower of Mexico and was named after Dr Andrew Dahl, a Swedish botanist. Dahlia belongs to the Compositae family. It was first introduced to Europe from Mexico and planted at the Botanical Gardens of Madrid. From there it spread all over Europe. Both Great Britain and Holland have been largely responsible for breeding thousands of cultivars.

Interestingly, dahlia 'bulbs' are actually tubers, and are very similar to peony roots - kind of like a pile of carrots.

The inflorescences are small: 10-15 cm in diameter. They consist of lingual and tubular flowers. The lingual flowers (petals) are large and fairly broad at the base. They are pointed, curved and curled into a tube at half (or less) their length. They extend in all directions from the middle of the flower. The tubular flowers are small. The inflorescences of this dahlia are somewhat similar to cactus and ornamental dahlias. They are considered the best for cuttings. Very much appreciated by florists and interior designers. They also look good in the garden, in single or mixed plantings, in flowerbeds and in borders. The flowers are fragrance-free.

Dahlia Hy Pimento is suitable for flowerbeds and naturalistic groups, for growing in containers and also for cuttings. It grows well in loose, fertile soils. Location - full sun, south-eastern exposure with protection from winds. Dahlia is an herbaceous, tender perennial with tubers that are sometimes mistakenly called bulbs. Note that Dahlia 'Bulbs' are actually underground tubers, and are very similar to peony roots - kind of like a pile of carrots. They are planted 10-15 cm deep and about 30 cm apart. If you want to grow dahlias in containers, use containers measuring at least 12 cm. During flowering, dahlias require intensive watering and fertilisation.

This variety is a heat-loving plant. Therefore, dig up its tubers in autumn and store them in a place where the temperature does not drop below 5 °C. After the first frost, cut back the leaves and flowers, and remove the stems 10-20 cm above the ground. At that time, the tubers should be dug up. It is best to use a fork so as not to damage them. Keep the tubers in slightly moist peat and in a dark and cool place. Remember that dahlias should not be dug up too early because they accumulate nutrients in their thickened roots. These substances are essential for good storage and better growth in the spring.

How to Plant ( Dahlia Hy Pimento ) 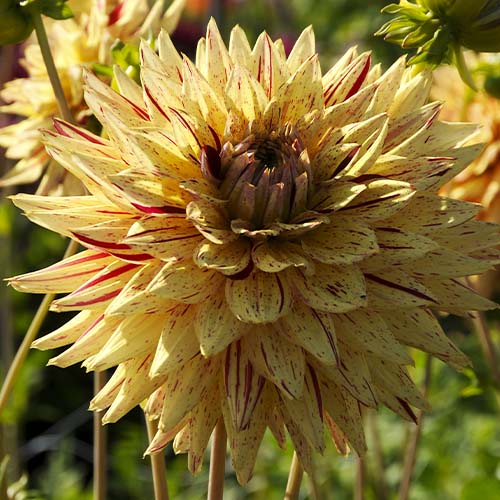